Politicians should be Public Servants first and foremost.

Matt Holliday has served as our Chester County Prothonotary since he was sworn in on January 3rd, 2016. During the last three and a half years he has implemented numerous changes to make the office more user-friendly and modernized. 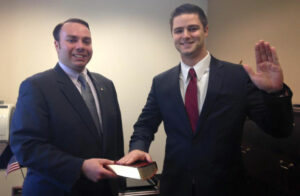 The Prothonotary serves as the chief clerk of the civil and family courts for the County, and also provides other services such as U.S. Passports to the public. Since his election, Holliday has implemented an e-filing process for court documents, acceptance of credit cards as a form of payment in the office, he’s begun the digitizing of all the old microfilm, and he has setup a process for the staff to scan in old cases into the system so that files from the 1980s and 90s can be searchable on a database and the images are available to the public. 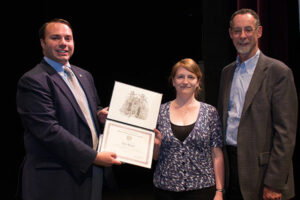 In an attempt to deliver on his campaign promises to be more efficient and fiscally conservative his office also closed 1,857 inactive cases that were left open by the previous administration. The county was wasting time and money (in postage) alerting the parties in cases that had not had any activity in nearly a decade. 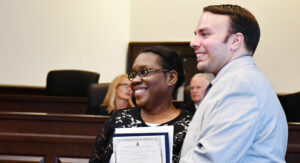 Under Matt’s leadership, the office has improved their county website to give better instructions regarding passport applications. Additionally, more staff members were trained to provide passport assistance, which has nearly eliminated the wait time for passport-application processing. 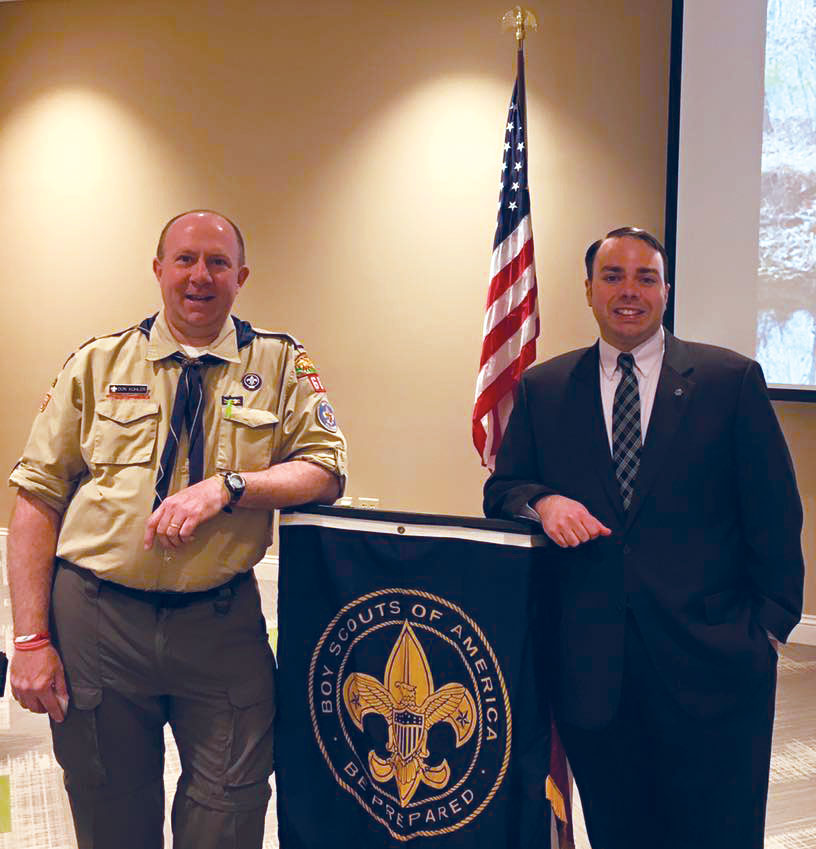 The Prothonotary’s Office also handles all filings for Protection from Abuse Orders, which are commonly obtained by victim/survivors of domestic violence as a way to get legal protection from those who abused them. One accomplishment that Holliday was most proud of was bringing staff from the Domestic Violence Center of Chester County (DVCCC), where Holliday serves as the Board President, into unused office space in the courthouse. He spearheaded that effort so that residents that filed a protection from abuse order in Holliday’s office could receive onsite assistance from the Domestic Violence Center to help navigate the court system and be advised of the other services the center has available.

Even with all of these improvements, Matt still managed to bring the office expenses in under the department’s budgeted amount for 2017 and 2018 without eliminating staff, and while still providing raises to everyone in the department each year. The cost-saving measures help to save taxpayer dollars.

GWCCC-Matt from The Media Message on Vimeo.

Today was my last day as County Prothonotary. My staff, being the amazingly generous people that they are, surprised me with a big party and more food and desserts than we could eat in three days. I felt like almost everyone who works in the courthouse stopped by to say farewell at some point today.

All day long, I had judges, administrators, janitorial staff, facility folks, lawyers, paralegals, secretaries, cafeteria staff, former employees, tech department personnel, law clerks, masters, and elected officials stopping by to thank me for my service and for everything I had done as Prothonotary over the past four years.

The truth is I couldn’t have accomplished any of it without the support of every single person who stopped in to say goodbye. The people of Chester County are very fortunate to have thousands of folks dedicated to their well being, and I was blessed to count myself among them for the last four years.

To my staff, I say keep making the people your number one priority and you can never go wrong. Be kind to each other, and back each other up, because you are one of the strongest teams I’ve ever had the pleasure of witnessing.

To Ms. Bookman, please take care of the people of Chester County, the staff, and yourself. It’s a tough job, that can be very stressful, but if you do it right you can change lives for the better.

To the voters of Chester County, I say thank you for four of the most stressful, wonderful, wacky, rewarding years of my life. I’ll never forget it. The Chester County Courthouse is home to some of the best public servants on the planet, and I was lucky to work with them. ... See MoreSee Less

Matt -YOU were the driving force behind all of us. Your kindness, generosity, hard work, and unfailing courtesy elevated everyone you came in contact with. Thank you for four years of benevolent and inspiring leadership. We are all better for having known and worked with you. Cheers.

You will be sorely missed. Thanks for your hard work and dedication.

We will definitely miss you. But you are n to write the next best chapter of your life! Congrats on the new adventure and best wishes as always!

It was truly an honor and a pleasure working with you Matt, you will be greatly missed! Best of luck in your new position, I hope to see you around!

Best of luck in your next adventure.

Matt, you will be missed in that position but God has something bigger. Be blessed!

Thank you Matt! You’re a great guy and your future looks very bright!

Thank you for your service Matt! 🙂

Thank you. sad to see you go. You did a great job.

Matt, you are the best. You will be successful and a mover and shaker wherever you go!

And I am sorry that I was not at the Justice Center as I certainly would gave stopped by. Best to you Matt

Peg forgot to tell me or I would have stopped by! Best of luck to you in your next adventure

Thank you for your service. Something tells me we haven’t seen the last of you!

Great parting words! The future is bright for you Matt:)

The County was blessed to have you in that role! I imagine it’s not the last one for you 😉

Matt you are a true inspiration to so many. Thank you for the profound positive impact you have had on so many lives including my own. I look forward to seeing the next adventure instore for you.

You will be missed, a true public servant. I know you will continue to do something fabulous!

You did an amazing job. You will be missed!

Sorry I missed the party I wanted to come see you at CCBA. Job well done

Matthew Holliday, thank you for your dedication to serving the people of Chester County. You truly reflect service above self in all you do!!! Proud of you!

Matt, you'll be missed in that office, but we all know there are many more opportunities for you in the future. Good luck in all that lies ahead, my friend.

Tis the season for boxes and bows, wrapping paper, and gift bags. Whether you are celebrating  Christmas or Hanukkah this is a time of gift giving. Too often we get hung up on electronics, clothing, toys, and gift cards, and we forget that the best gift we can give someone is the gift of kindness and the best possible version of ourselves.

A few years back the Rotary International annual theme was, “Be a gift to the world.” At the time I viewed it as just another platitude, but in truth it is a rather profound statement. With the right attitude and some selflessness, you can choose to live your life in a way that makes you a gift to those who come in contact with you. While that certainly is easier said than done (after all we are all human), it might help if you identify a way that you can volunteer your time for the benefit of others.

For me joining The Rotary Club of West Chester, has opened up hundreds of opportunities for me to help others over the years. Selfishly it has also given me well over a hundred gifts in the form of dedicated, courteous, and caring fellow Rotarians who have supported me, in good times and in bad, for the last nine years. And while joining our Rotary Club may not be the right path for you, I promise that turning yourself into a gift to the world is. It’s not always easy, and you will have plenty of days that you fall well short of the mark, but on the rare days that you achieve it, you’ll be glad that you did.

Merry Christmas, Happy Hanukkah, and may you have a great New Year! ... See MoreSee Less

Matt call me when you have time

Merry Christmas - you are a servant leader! Thank you!!

Yes Matt it is about service above our self - you have been a leader in this and I alway's wonder where you find the time. From the fun 🌶 Chili contest (I still remember your hat) this year to your contributions to the Gala of the Crime Victims Gala. It seems we crossed paths' in the past and I look forward to the years to come to make Chester County to Paradise for all living here! God Bless you! It is unfortunate that I could not continue my Birdsboro membership but I am to much of an independent thinker and do not believe politics have a place in charities.

You are a gift to the world! Have a wonderful and safe holiday!

Matt, You are a gift to all who know you! ❤️

To serve, not to be served.

Today is our National Day of Thanksgiving. While there are many things to be grateful for, I find myself thinking of a group of individuals in Chester County that I am most thankful for today and every day. The men and women of our volunteer Fire and Ambulance Departments are often over looked, but these hometown heroes will likely be called away from their families at some point today, because one of us deep fried a turkey that went wrong, someone got in a bad car accident, or some family argument got out of hand.

I’m personal friends with many men and women in the West Chester Fire Department and Good Fellowship Ambulance and I must say these volunteers are second to none. The number of times I have witnessed them drop what they are doing and race out to help our community are far too great for me to count.

Sadly in 2019, we are facing a strained volunteer emergency personal service all across the county. These brave men and women are finding themselves stretched further and further as their aging comrades aren’t being replaced by enough new young fire fighters and para-medics. If you or someone you know is looking for a way to give back and make a huge difference in our community contact your local fire department or ambulance company to find out how you can be a hero.

God forbid we ever find ourselves in a situation where we don’t have enough volunteers, the ramifications for our communities will be severe. So today I thank those who sacrifice their time and safety over and over again year in and year out. We are thankful for you and your service. God bless you all. ... See MoreSee Less

Good reminder. Thank you Also grateful for dedicated public servants like you. Your efforts are very much appreciated.

Thank you so much, Matt! Your post is beautiful and so truthful about the life of first responders. Your dedication, awareness, and promotion for what we do is greatly appreciated. Have a great Thanksgiving and I’m thankful for people like you in this world!

So well said Matt, and so true! Thanks.

Thank you Matt! Happy Thanksgiving to you as well!

Thank you, my friend! Happy Thanksgiving!!!